While upgrading my blog software Cilla to Java 8 and Hibernate 4, I found out that the old hibernate3-maven-plugin refused to create schema.sql files. Well, it wasn't really surprising. The name of the plugin already implied that the plugin won't play with the next major release of Hibernate.

I could not spot an official update of the plugin. Instead, I found Kai Moritz new Hibernate 4 maven plugin, which turned out to be very useful.

One key feature is to set up and initialize a local database for unit testing. I don't need this feature for Cilla (yet 😉). All I need is a hbm2ddl style generation of a SQL schema file for setting up new instances of my blog software from scratch. It turned out that the plugin was easily configured that way, and so it got almost a drop-in replacement for the old plugin.

This is what the <plugins> section of the project's pom file looks like:

With the target set to NONE, the schema.sql file is quietly generated while building the project. If set to SCRIPT, a copy will be dumped to stdout.

Since no actual database is created, there is no need to add user, password and url parameters.

A list of all configuration options can be found here. The plugin is available at Maven Central. 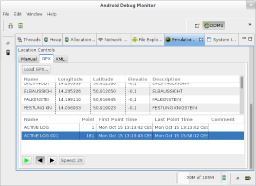 The Android Device Monitor is not just an aid for debugging applications, but also allows to simulate GPS positions, so you won’t need to actually run around in the countryside for testing your GPS app. But where to get test data from?

I have recorded some of my hiking trips with my Garmin GPS 60, and saved them in Garmin’s proprietary gdb file format. These files contain waypoints, routes and also recorded tracks.

The Swiss Army Knife for GPS files, gpsbabel, comes in handy for converting a gdb file into the GPX file format that can be read by DDMS. This is the line I used for conversion:

After converting and loading the GPX file into DDMS, I can now send single waypoints as GPS events to the emulated device. But beyond that, I can also play back a recorded track, and simulate that I carry around the emulated device on that track. This is very useful for testing GPS apps.

Android 4.2.2 comes with a new security feature. If you try to connect to your smartphone via adb and USB debugging, you will note that your device is marked as "offline". Additionally, a dialog shows up on your device, presenting an RSA fingerprint of your computer and asking for confirmation to accept a connection.

The rationale is that if your device is lost or stolen, there is no way to read its content even if USB debugging was enabled.

Now, presenting an RSA fingerprint surely is a nice idea to avoid man-in-the-middle attacks. But how do you get that fingerprint in order to compare it with the one shown on the device? At first I thought there must be a command (or an adb option) that prints out the fingerprint, but I wasn't able to locate one. After spending some time with my favourite search engine, I finally dug up a rather more than less complicated command line that prints out the footprint:

The command must be executed in the directory where adb stores the adb key, which usually is ~/.android (or /root/.android if adb runs as root).

If you are somewhat security paranoid, you surely wonder why, on the one hand, Google shows a footprint on the device, but on the other hand makes it difficult to find out if that footprint actually belongs to your computer.

After hours of trying and wondering why my release scripts suddenly stopped working, I found out that maven-release-plugin seems to have an issue with git on recent systems. If you invoke mvn release:prepare and find out that the release process just runs against the current SNAPSHOT instead of the release version, you likely stumbled upon bug MRELEASE-812.

The reason for this issue seems to be that mvn release:prepare parses the output of git status. However the status is localized in recent versions of git, and maven-release-plugin fails to parse the localized output.

The coming fix will probably use git status --porcelain, which returns a machine-readable output. However, for the time being

is a valid workaround.

Finally, after almost three years of development, I have published the source code of Cilla. Cilla is the software that runs this blog.

I started working on a new blog software on June 3, 2009. It should replace my old home page made with PHP. I decided to write an own blog software in Java, as there was no open source Java blog software that suited my needs. However I never expected that this project would grow that huge. The core modules alone consist of 27,000 lines of code in 295 classes.

The core modules of Cilla are now available on my development site shredzone.org. The source code is published on GitHub. The documentation, a few plugins, and a simple example web frontend are still missing. I will publish them later.

Cilla is published under a GNU Affero General Public License.