When I found this Amiga 1200, I felt pity for it. The case and keyboard was very yellowed, but what was even worse was the screwed up attempt to fit a Gotek drive into the case. The previous owner obviously tried to open the floppy disk area with some kind of cutter pincers, essentially ruining the case.

My initial plan was to whiten the case and keyboard, clean the botched cut at the floppy drive with a rotary tool, and nicely close it again with a 3D-printed part. But then I got a better idea. 😁

Let's have a look inside first. There is a Rev 1D.4 board in good optical condition. I replaced the electrolytic capacitors, and upgraded the ROMs to AmigaOS 3.2.1.

On the bottom of the PCB, I found a copper wire for a so-called "floppy fix". When Escom was producing the final batch of Amiga 1200 systems, Amiga floppy drives were not available any more, and Escom had to find a way to use regular PC floppy drives instead. However, many games and demos with own trackloaders fail to load on machines with this modification.

The original floppy drive of this machine was not existing anymore, and Gotek drives can perfectly emulate Amiga floppy drives, so I decided to undo the floppy fix by removing the botch wire. To restore the original RDY signal, I instead put a wire from pin 34 of the internal floppy connector to pin 1 of the external connector.

Since I was working on the bottom side of the PCB, I should also remove E123C and E125C, to enhance the stability of accelerator boards. However, on this machine these capacitors were not populated, so there was nothing to do.

It was finally time for a first thorough test run. Everything went fine, but then I noticed that the right mouse button was not working on both ports. I wrote a separate blog article about the cause and the fix, but to make a long story short, all I had to do was to replace four resistors with ferrites.

My work on the board was completed after that, and it passed all tests.

As with my other refurbishments, I'm not only cleaning the machine, but I also futureproof it with some extras.

First of all: The yellowed case with the ugly cut. I was sure that even with a skillful repair attempt, the case would never look really beautiful again. Also I always wanted to have a black Amiga, so I decided to rehouse the machine into a brand new, black a1200.net replica case instead.

The floppy drive was missing, but instead of the Gotek drive that was there as replacement, I decided to use a Centuriontech GoEX drive. It uses an SD card instead of an USB stick, and comes with a dial encoder, which makes selection of a floppy image much easier. There is also a matching OLED display for it, but for my new Amiga I preferred to use a tiny display that is not that noticeable.

The display itself is one of those 0.91" OLEDs one can find in virtually every maker shop. However it is important to swap pin 1 and 2 when soldering wires to it, as the power pins are swapped on this display type compared to the original GoEX display module.

I then printed an A600 display module case, which luckily also fits on an A1200. I used hot glue to assemble the module, but in retrospect I should have used standard glue instead, since the hot glue softened the PLA of the print. The module is then just clipped into the cooling vents of the Amiga, no need for gluing.

To use this kind of OLED, a file called FF/FF.CFG needs to be created on the SD card, which contains this line:

I also added an Indivision AGA MK3 for a pixel-perfect picture on modern TVs via HDMI. While doing so, I found out that the a1200.net replica case seems to have different measures than the original case, so I created a modified trapdoor and holder for this kind of case.

The computer came with a Marpet Developments M1207 RAM expansion in the expansion port. It got a fresh button cell, and now provides the machine with 4MB of additional Fast RAM, a 68882 FPU, and a RTC.

What's missing? The black keycaps that are matching the black case! After many years of waiting they were finally available, and I got a set delivered right in time before Christmas.

The black case does not include badges, but I found a nice black one from Badgeman.

After that, the Amiga was finally ready for the final assembly.

If Commodore had given the choice of the case color back in the 1990's, I would have chosen a black Amiga. And now here it is, an all black Amiga 1200 with a completely new outerior, and modernized interior. 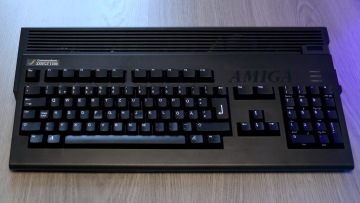 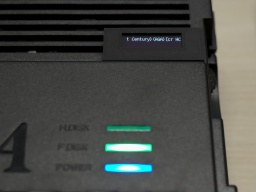 Ever since I got my Amiga 4000, I was pondering about if an Amiga 1200 would have been a better choice. I mean, the Amiga 4000 is nice because it has a lot of space for extensions. But on the other hand, it is rather bulky and heavy, so it isn't much fun to take it to a friend or a party, unlike the compact and light Amiga 1200.

But why not have both? 😉 I had found an Amiga 1200 offer on the Bay that was too good to be ignored, so I bought it.

It's an Amiga 1200 from the days after Commodore went belly up, and when Escom took over and sold the last Amiga stocks. The good news is that the Escom cases were made of ABS with an anti-UV treatment, so they will never yellow. The bad news is that the keycaps were not treated, and are very visible yellowed by now.

I sent the keycaps to the experts at the CBM Museum Wuppertal for whitening. The case itself is almost in a mint condition, all it needed was a bath in warm dishwater.

Let's take the computer apart and have a look inside.

There's a 2.5" hard disk, which turned out to contain a Workbench, a few games, and also many bad sectors. I'm going to replace it with an SD Card solution anyway. The shielding has a bit of flash rust and was bent around the ROMs, probably from forceful prying out the ROM chips with a screwdriver. Besides that, the overall status is quite okay.

Under the shielding, I found the mainboard in a good condition, especially without flash rust on the modulator. To my surprise, it is a Rev. 1D.1 board, which was actually the first broadly sold board revision. In one of the last Amigas that have ever been produced, I had rather expected to find a revision 2 board. Anyway I was lucky because the 1D.1 revision is said to be the most stable one, and it also has a good Lisa chip that was manfactured by HP. On both CIA chips I found traces of flux, so the board seems to have been repaired before.

According to my contact at the CBM Museum Wuppertal, Escom sold everything they could find at the Commodore remainders. Allegedly they also produced "new" Amiga computers with refurbished mainboards. Maybe this is one of them?

I first inserted diag ROMs and checked the hardware, but found no problems, so I upgraded the system to AmigaOS 3.2. The next thing on my to-do list was to replace the electrolytic capacitors, as they tend to leak over all those years, causing damage to the PCB. I have already done that on my Amiga 4000 before, but on this model the space was a bit more limited. I even had to remove a freshly replaced SMD capacitor because another capacitor did not fit next to it any more.

To enhance the stability of accelerator boards, it is recommended to remove the capacitors E123C and E125C on the bottom side of the PCB. The easiest way is to use two soldering irons like a pair of tweezers.

After a thorough wash with IPA, the board was then ready to move back into the case.

I want to modernize the Amiga so it can be connected to a HDMI monitor. The RGB to HDMI solution of the Amiga 500 won't work on the AGA chipset though, so I decided to get an Indivision AGA MK3 from Individual Computers. It is plugged onto Lisa and one of the CIA chips, and offers an HDMI output even with sound. (Which is quite an accomplishment, as both chips are not connected to a sound line.)

Since I was on it, I also extended the memory with an ACA1211. Unfortunately it turned out that AmigaOS 3.2 is incompatible to the ACA1211, and the system won't boot in this combination. I had to return to the original AmigaOS 3.0 ROMs again. Eventually I traded the ACA1211 for an ACA1234, which is also an accelerator and works fine with the latest AmigaOS.

To make the wire mess complete, I replaced the floppy disk drive with a GOEX drive from Centurion Tech.

In the meantime, I got the whitened keycaps back. They were almost white again, but sadly there is still a slight, but visible yellow tint. Maybe I will buy a new set of key caps once they are available. The Amiga would then look as new.

The original Escom label is just a cheap sticker. It looks ugly to me, so I replaced it with a replica Commodore badge.

And then, for the first time after my purchase, I could close the Amiga 1200 case again.

Please welcome the newest addition to my Amiga collection!