A few years after I got my Amiga 500, I bought an Amiga 4000 from the pay I got doing my civilian service. At its peak, it was housed in an RBM Big Tower case, and had all kind of expansion cards and an 68060 accelerator board. It was my pride and joy. Later, after Commodore went bankrupt, I switched to Linux systems. My Amiga 4000 was put on a diet and moved back into a desktop case.

The restored Amiga 500 is meant to be used for playing old games and watching demos. In contrast to that, the Amiga 4000 is supposed to become a workstation again. It should be connectable to modern monitors, and should be as silent as possible.

This is the state of the case before restauration. 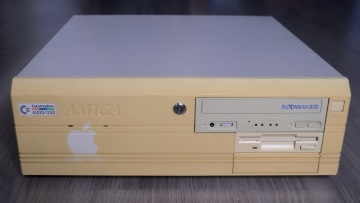 The computer has suffered a lot in the past decades. The powder coating of the metal cover got a lot of deep scratches from CRT monitors that were placed on it. The plastic front got a deeply yellowed tint. To make things worse, there was a sticker on the front that kept the plastic from yellowing, but now the outline is permanently "burned" into the front instead. The keyboard was in a similar state, although not that badly yellowed.

The CBM Museum Wuppertal already did an excellent job with whitening my Amiga 500, so I decided to also let them whiten the front panel and the keyboard. The experts at the museum warned me that the logo might stay visible after whitening though, but then I could still resort into dying the front black, or even 3D print a new front.

Meanwhile a paint shop is taking care for repainting the metal cover. I decided to keep the original color, RAL 7044 (silk grey).

Let's have a look at the inside now.

A true Amiga killer is the NiCd battery that serves as a power backup for the RTC. Sooner or later it leaks and spills battery lye onto the PCB. The lye corrodes the components and traces in its vicinity. If untreated, the board can become irreparably damaged over time. When I first heard about the problem eight years ago, I immediately cut out the battery, but sadly it had already leaked.

For the restauration, I needed to repair this part of the PCB. I generously removed all affected components. Then I neutralized the lye with vinegar essence, rinsed the area with water, then cleaned and dried it with IPA. After that, I used a fiberglass pen to remove the solder mask down to the bare copper, to have an unobstructed look at the damage.

I lost two pads that seemed to be too damaged by the lye. They just came off while I was cleaning the board. Luckily one of them was not connected, and the other one could be replaced with a short piece of wire.

After that I rang all the traces. Three of them were open and also needed to be fixed with a piece of wire. I then used solder to tin the bare copper traces and protect them from corrosion. Finally, I soldered in fresh components.

The lye may run to the bottom side through the vias, so it should be checked as well, and repaired if necessary. Luckily I could see no damage on my board.

Since the old rechargeable battery almost killed my Amiga, I decided to use a 3V button cell for backing up the RTC. To prevent the cell from being charged when the power is turned on, I replaced R179 with a standard diode.

Since I removed the crystal and capacitors, the RTC needs a recalibration. I connected pin 17 of the RTC chip (U178) to a scope, and then used a plastic screwdriver to adjust VC190 until the measured frequency was exactly 32768 Hz. 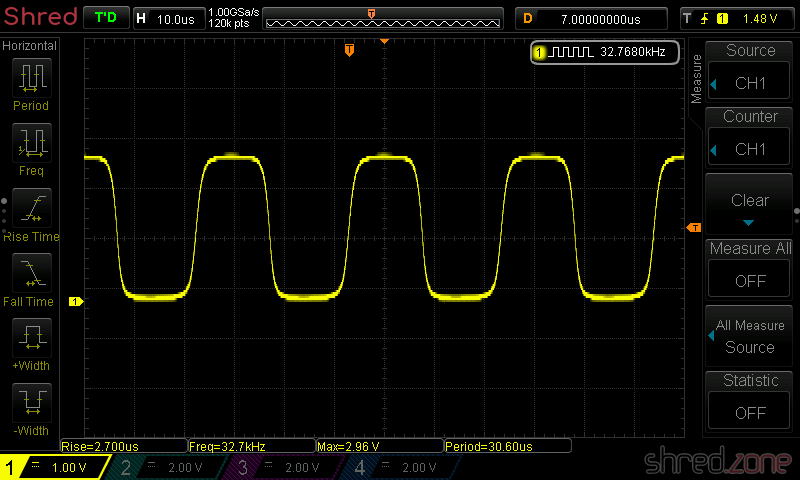 Electrolytic capacitors may leak, similar to the battery, and it is recommended to replace all of them with modern premium caps. Some people replace them with ceramic capacitors. They cannot leak, but may have other disadvantages. There are good arguments on both sides, so it's a decision that everyone has to make themself. I decided to order the premium capacitors from my Amiga 4000D Bill of Material list. They are made by Panasonic and have an expected lifetime of up to 10,000 hours, which is maybe the tenfold of the original caps. They are also certified for temperatures of up to 105°C, which further extends lifetime.

There are different ways to remove the old electrolytic capacitors. The recommended way is to use two soldering irons, or a hot air rework station. I decided to use a different method that I read about, and twist them off with pincers. It worked surprisingly well, and it took only a few minutes to remove all the caps. To avoid causing damage to the pads, care must be taken that the caps are only slowly twisted, but not pulled from the board.

On the Amiga 4000 the leakage usually starts in the "audio corner", where many SMD caps are concentrated on a small space. I was lucky because all the caps were still intact there. On my board, C317 has leaked though. It was visible by the corroded solder joints around it. When they were heated, there was also a typical telltale smell of microwaved fish. Again, I generously removed the components around the damaged part, cleaned the PCB, and soldered in new parts.

There are also a few axial caps on the daughterboard. They usually don't tend to leak as easy as SMD caps, but since we're on it, they should be replaced as well.

When I repared the battery damage, I also had to remove two of the SIMM sockets. The original sockets have plastic brackets that easily snap off, so I decided to finish what I started, and replaced all five sockets with new ones having metal brackets.

In a final step, I washed the board with IPA. It was then repaired, cleaned, and ready to be put back into the computer case. 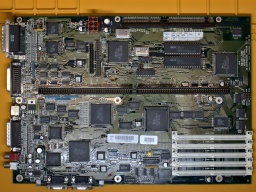 In the next part I will take care of the power supply, and I will put the system back together.