The ZX Spectrum was a comparable cheap home computer, and thus the tape loading and saving mechanisms have not been very sophisticated. The tape recording is just a stream of short waves (0 bit) and long waves (1 bit). The stream starts with a leader signal (a series of even longer waves) and a single sync pulse. So, in the theory, reading a tape recording means measuring single wave lengths, by taking the time between two zero-crossings, and converting them into a sequence of bytes.

But then again, we are dealing with 1980's analog technique. In practice, we will find signals like this. A click produced an additional zero-crossing that is to be ignored. Also, the amplitudes and DC offsets change all the time. 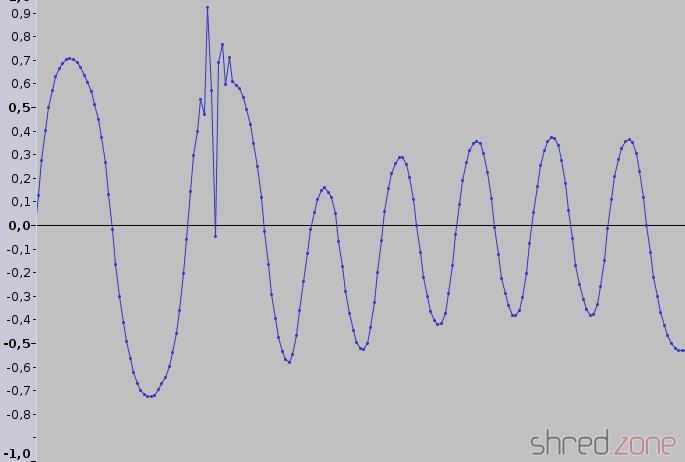 And pooof... There went another week of nightly hacking Python code, having very close looks at audio waves, and searching for clues about why tzxwav won't behave like I expect it to behave. But I think the result is worth looking at now! tzxwav now reads almost all of my tape samples without those dreaded CRC errors. If there are CRC errors, the sample was usually so damaged that it would need manual restauration.

And as a bonus, it is now almost twice as slow as before. 🤭 But speed was never a goal anyway, as people are likely to convert their old tapes only once.