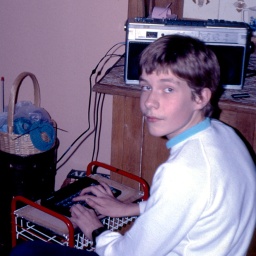 Since I am in the mood of heavy ZX Spectrum retro action, I dug out all my old computer tapes in an attept to digitize and convert them. It turned out to be more difficult than I thought...

The first trouble was to find a tape player. I had disposed my last tape recorder a couple of years ago. The new ones I found at Amazon looked nice on the first sight. They could be connected to the USB port or even digitize the tapes straight to an USB stick. The customer reviews were scaring off: cheap plastic, poor sound, digitizing to USB stick was only possible on battery power... I had more luck on eBay, where I found a genuine 1990’s Aiwa Walkman (it’s even a recorder, with auto reverse and Dolby NR) in good condition for about the same price.

I connected the Walkman to my computer’s microphone input using a cable with 3.5mm stereo jacks, selected the correct tape type (Normal or CrO2), and turned off Dolby NR. Then I digitized right away, using Audacity for recording and post processing. I used 16 bits per channel, and a 44100 Hz sampling rate. The ZX Spectrum provided a mono signal, so I chose the left or right channel (depending on the quality) and discarded the other one. Mixing down the stereo signal turned out to be problematic, as well as using a lossy file format like ogg.

The WAV files can be loaded into the Fuse Emulator, but it’s better to convert them to TZX files, as they are much smaller. There are a few tools for that, for example audio2tape that comes with Fuse. I wasn’t satisified with the result though, as the generated TZX files contained many CRC errors. MakeTZX is also worth a try, as it supports digital filters, but I was unable to make it run on Linux. Some other converter tools are for Windows only, and thus not very interesting. 😉

So I found myself writing a set of TZX tools in Python. It contains tzxwav, that’s yet another tool for converting WAV files to TZX files, but is robust against poor audio quality. It took me three weeks of work, and about 30 hours of tape material, until it was able to successfully read almost all of my tape recordings.

An advantage of TZX files is that they contain the raw ZX Spectrum binaries, so they are very easy to extract. tzxcat allows to retrieve single binaries from TZX files, which can then be converted into PNG files, BASIC sources or whatever, provided there are converters for it.

What I have now are TZX files of all my old ZX Spectrum tapes. It was very interesting to rediscover my old files, screens, programs and source codes. In 1987 and 1988, I wrote a lot of more or less useful tools, designed several fonts and completed two demos.