And yet another Speccy that I could buy for a good price. The seller said it was "untested", but I allege that he knew very well it was broken. It's fine for me as I mainly buy those things for the repair fun. 😁

The computer was in a sad condition when I got it. What's remarkable is that the machine was "assembled in Portugal". It's the first time I see this, and to be honest, it was one of the reasons why I wanted to have it. According to the very few information I found on the internet, those machines were intended for the Portugese and South American market, but some of them also made it to the UK and other European countries.

The faceplate was heavily bent, and a connector of the keyboard membrane was broken off. It seems that the previous owner tried to replace the membrane, but wasn't able to remove the faceplate.

That's the first hint that the machine wasn't "untested", but underwent a botched repair attempt.

I got the second hint when I tried to power up the machine, but found that it was completely dead, with all the voltages missing. The 5V is generated by an 7805 voltage regulator. It could just have died of old age. But considering the other hint, I rather guess that the previous owner has tried to power this machine with a standard 9V power supply. It has a reversed polarity, which kills the 7805 instantly, and usually damages the lower RAM chips and other components.

Let's have a look inside. There's an Issue 6A board inside, which is the final revision of the board. But besides that, there were no surprises. Anyway it's the first Issue 6A board I own, so I'm happy to have it.

The 7805 regulator is definitely broken, but I would have replaced it with a Traco Power DC/DC converter anyway. After I replaced it, the 5V line was back. To my surprise, the 12V and -5V lines were also back, so at least there was no further damage to the power supply.

I did my usual composite mod. Then I connected the computer to my monitor and powered it up to find out what else is broken. To my surprise the start screen appeared, and the Diag ROM also found that all RAM chips are working.

Okay, so much for the "repair fun" I was hoping to get. On the other hand, this board has a second custom chip, the ZX8401, also known as ZXMUX chip. If it would have been damaged, repair would have been a lot more difficult. Not impossible though, since the ZXMUX can be simulated by a few standard SMD chips.

Now that the Speccy was repaired, I continued with replacing the electrolytic capacitors. I also found and fixed a lot of cold joints at the lower RAM chips. The refurbishment of the board was completed after that.

Let's have a look at the case. The membrane connector was broken, but luckily there are new membranes available at retro shops. The previous owner tried to remove the faceplate, which is most often glued to the case. Most often, but not here. On this computer, the faceplate was just held in place by four brackets. All that would have needed to be done was to open these brackets and then easily pull of the faceplate.

Sadly, thanks to the botched repair attempt, the original faceplate was bent too much to be recoverable. It also had some visible scratches. I wished I could have salvaged it, but I decided to replace it with a new one instead. This time I took a metallic red faceplate, which looks as hot as a sunset in Portugal. 😉 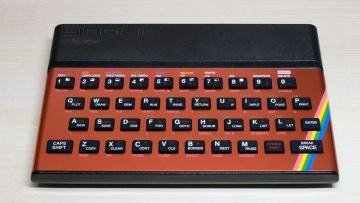 And there it is, another ZX Spectrum for my collection.