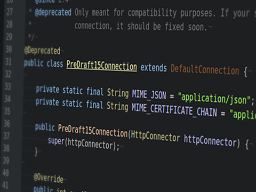 In the latest ACME draft 15, Let's Encrypt introduced POST-as-GET requests. It is a breaking change that is not downward compatible to previous drafts.

This brought me into an uncomfortable position. While the Pebble server enforces the use of POST-as-GET, other servers don't support it yet, like the Let's Encrypt server. For this reason, acme4j needs to support both the pre-draft-15 GET requests and the post-draft-15 POST-as-GET requests. Luckily I have found a solution that is totally transparent to the user, at least as long as no other ACME server is used.

As soon as Let's Encrypt supports POST-as-GET on their production servers, I will remove the fallback mode from acme4j again. It just clutters the code, and I also have no proper way to test it after that.

Hint: Before updating acme4j, always have a look at the migration guide. It will show you where you can expect compatibility issues.